Live On Top Of The Four Seasons Hotel! The Best Condominium In Toronto!
Price $7,000,000

If you would like to discuss options please call us at 416-927-9898 or email at tkonkina@rogers.com and we will get back to you within the next 24 hours.

If you would like to discuss options please call us at 416-927-9898 or email at tkonkina@rogers.com and we will get back to you within the next 24 hours. 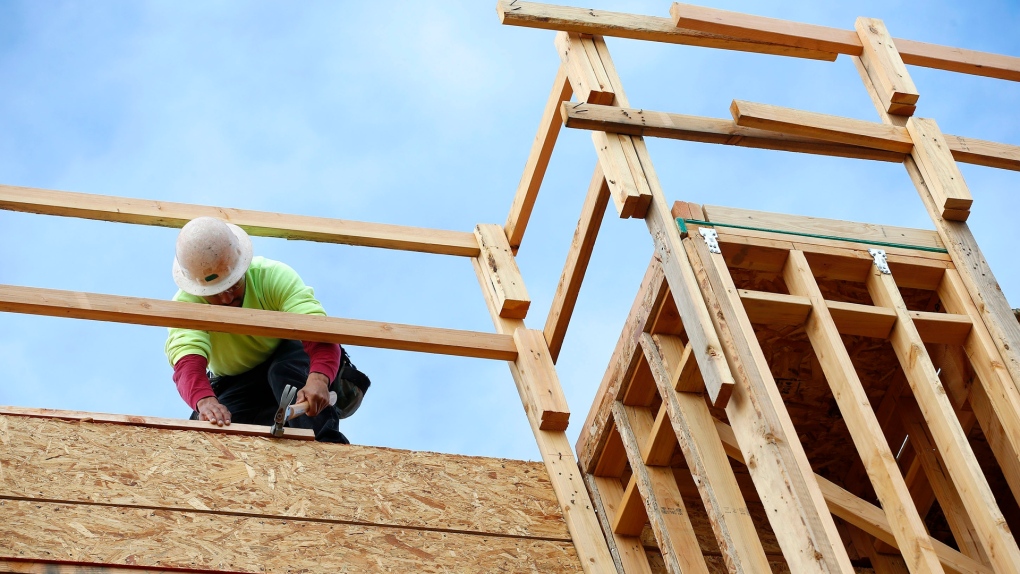 OTTAWA — Home construction in Canada picked up last month, driven by British Columbia and Alberta, defying expectations that homebuilding activity would cool down.

The seasonally adjusted annual rate of housing starts rose to 222,324 units in July, up from 212,948 in June, Canada Mortgage and Housing Corp. said Wednesday.

The ramp-up likely reflects strong demand for new housing from the end of last year into the start of this year, TD Bank economist Diana Petramala said, adding that the new construction market tends to lag real estate demand, which has started to fall.

Multiple urban starts increased by 10.4 per cent to 141,950 while single-detached urban starts fell by 3.9 per cent to 64,172. Rural starts were estimated at a seasonally adjusted annual rate of 16,202 units.

“Much of the recent strength has been concentrated in B.C., where starts have rebounded back close to record highs after slowing late last year,” Royal Bank senior economist Nathan Janzen wrote in a report.

The housing start data came as Statistics Canada also reported the value of building permits issued in June rose to $8.1 billion, up 2.5 per cent from May and the second highest value on record.

The value of building permits for non-residential structures in June rose 8.8 per cent to $3.0 billion.

The second quarter saw a total of 736 sales for investment properties over $1 million, for a total of $6 billion, according to a new report from Altus Group.

That represents a 34% increase over the previous quarter.

And it seems developers are still bullish on the residential housing sector, despite a recently cooled market as a result of recent housing measures and Ontario’s Fair Housing Plan.

Residential land was the strongest sector for the GTA’s investment property sales, accounting for 25% of overall activity.

The office sector saw a total of 66 sales at a total volume of $1.4 billion – that was up 130% over the previous quarter.

“The most notable sale of the quarter was 700 University Avenue, sold by Ontario Power Generation to Kingsett Capital for $433 million, representing a price per square foot of $355 and a cap rate of 5.9%,” Altus Group said in its report.

A total of 140 transactions in the industrial sector were reported in Q2, an increase of 21%. The sector reached its second-highest quarter in terms of dollar volume, reaching $971 million.

“Consistent with the theme for the quarter, a record was also set for the number of GTA retail transactions with 175 sales totalling $831 million, up 99% from last quarter and 15% from the same quarter last year,” Altus Group said. “The most notable transaction of the quarter was the sale of Promenade Mall in Vaughan, from Cadillac Fairview to Liberty Development Corporation & Serruya Private Equity, for a total of $249,000,000, representing a cap rate of 5.5%.”

The latest forecast from CIBC Capital Markets is for Canadian interest rates to increase again in December this year.

In its forecast summary released this week, CIBC calls for a hold steady until then with the 1% rate coming in just before Christmas and holding until the summer of 2018 when a further 25 basis points rise will take rates to 1.25%.

If the forecast proves correct, interest rates will reach 1.50% by the end of next year and will be increased again by the summer of 2019 to 1.75%.

With home prices rising across the country, many would assume that housing costs (including rent and mortgage payments) are the most expensive budget item for the average Canadian family.

For most of us, the income and payroll tax deductions on our paycheques do not total anything close to this percentage. But to understand the full cost of taxation, you must consider all the taxes — both visible and hidden — that we pay throughout the year to federal, provincial and municipal governments including sales taxes, property taxes, fuel taxes, carbon taxes, import taxes, alcohol taxes and much more. All these taxes add up and make our overall tax bill expensive.

So how does the overall tax bill compare to housing costs?

The average Canadian family spends 22.1 per cent of its income on housing — only about half as much as it spends on taxes. In fact, taxes consume more of the average family’s income than all the basic necessities of life combined. If you add up the average family’s spending on housing, food and clothing in a year, it comes to 37.4 per cent of its income.
We should not simply assume that higher taxes always provide better government services

With 42.5 per cent of income going to taxes, Canadian families may rightfully wonder whether they get good value for their tax dollars. Of course, taxes fund important government services. But we shouldn’t simply assume that higher taxes always provide better government services.

While it’s ultimately up to individual Canadians and their families to decide if they’re getting the best bang for their money, you must know how much you pay in total taxes to make an informed assessment. That’s where our annual calculations help. They estimate the cost of government for the average family. Armed with this knowledge, Canadians can then determine if they think they’re getting good value in return.

In most provinces, more than 50 per cent of our tax dollars finance generous pay for government employees. In fact, government employees, on average, receive 10.6 per cent higher wages than comparable private-sector workers doing similar work. And that’s on top of the much more generous non-wage benefits (pension coverage, job security, early retirement) the government sector also enjoys. Of course, we need qualified and well-paid government workers, but is this pay and benefit premium the best use of our tax dollars?

In the case of health care, which consumes around 40 per cent of most provincial budgets and is a fast-growing expense, international comparisons show that, despite high levels of spending, Canadians have comparatively poor access to technology and doctors, and endure longer wait times for surgery. It’s hard to see how we get good value for our money in public health care when measured against other countries that also offer universal access.

Most troubling is when our tax dollars are outright wasted on boondoggles and failed government programs. A recent study documented more than 600 cases where the federal government failed to meet its own objectives over a 25-year period, resulting in up to $197 billion of wasted tax money.

Bottom line — we need a robust public debate about the overall tax burden and whether we’re getting our money’s worth.

The annual rankings of the world’s most liveable cities has been revealed and three of the top ten are in Canada.

The listings from The Economist Intelligence Unit is based on several key factors:

Melbourne, Australia leads the list followed by Vienna, Austria and the next three positions are all in Canada.

Vancouver (3), Toronto (4) and Calgary (5) all score highly in the key metrics for the listings.

Some of the world’s most famous cities do not make the top ten due to high levels of crime offsetting some of their positives, these include New York, Paris, London and Tokyo.

The first building in Toronto that will be taller than First Canadian Place, and the first aiming to cross the ‘Supertall’ threshold of 300 metres, is now under construction. Digging commenced this morning on The One, an 82-storey tall mixed-use tower that will top off in a couple of years at 306.3 metres or 1005 feet. Designed by London’s Foster + Partners and Toronto’s Core Architects, the complex by Mizrahi Developmentswill feature 7 double-height storeys of retail and restaurants (also connecting to the local PATH network and subway underground), 10 storeys of hotel, and another 66 storeys of residential and mid-tower mechanical.

While work to level and clear the site and to preserve a portion of a heritage building has been going on for many months, equipment to start the digging has been arriving for a few weeks. Seen above, the photo from overhead and taken last Friday, shows equipment for shoring at left.

This morning the digging began. Sam Mizrahi, President of Mizrahi Developments, told us he was “excited to confirm that, yes, we have officially mobilized and commenced construction on The One.” The photo below shows the scene from across the intersection of Bloor and Yonge streets from earlier today. The close-up that follows has been lightened to highlight the excavator at work. The site in context on August 23, image by UT Forum contributor LNahid2000 Close-up on the digging on August 23, image by UT Forum contributor LNahid2000

Just to the south of the site on Yonge Street, a construction site office has been set up. The site office for construction of The One located at the south end of the site, image courtesy of Mizrahi Developments

Mizrahi also wrote this morning “the Presentation gallery for The One residential sales will open next month” on Davenport Road. We expect an official ground breaking ceremony in September, and we are told that there will be an announcement of some of the commercial tenants at the time. Scale model of The One at the Toronto of the Future show in June, image by Craig White

When complete, The One will be Canada’s tallest building.

Want to know more about The One? You can visit our database file, linked below, to see several renderings, and to get more details. Want to talk about it? Get in on the ongoing conversation in our associated Forum threads, or leave a comment in the space provided on this page.