By the year 2030, 70% of the world’s population will be living in cities, according to a recent report by ARUP. This is our global future! People look at the opportunity to walk to work as a great luxury and of great personal benefit. It is also good for your health and helps you to stay fit.

I love that I can walk to the store and pick up a few things for dinner. Everything I need for day to day living is right in my neighbourhood. The notion that I don’t need to get into my car and drive for a bag of milk is worth so much to me.

That’s one of the most amazing things about Toronto: the neighbourhoods. They’re like little cities in and of themselves and if you live in one, you too can walk to the store, sit at a cafe, go for a lovely dinner or simply stroll along the streets and do a little window shopping.

While the suburbs and sleeper communities have often been heralded as the solution for the population growth’s endless need for new housing, in reality, many people want to come back to the city and put an end to commuting and the endless drive. With most companies, health care resources, educational institutions and other businesses remaining in the cities, the population is following that trend.

The quality of life those people experience will depend entirely on cities being walkable. Why? Because a major determinant of quality of life is in the way people move around their city: easily, enjoyably, and safely.

“… a walkable city is a better city and that the more we walk, the better the city in every respect.”

Toronto is one of the cities that is on its way to being part of the walking world. That is why I am so confident that the condo market in Toronto will stay healthy and prices will continue to increase. Investors will benefit from that and for people who are still hesitating? It could quickly become unaffordable. Buying a home in central or downtown Toronto now is an investment in the city and its future as a walkable, enjoyable, safe place to live.

Mobility is intrinsic to the quality of life experienced in cities. But for the past century, the car has dominated how we plan and grow our urban areas. We must now seize the opportunity to place people back at the heart of our cities and drive a human focused approach to the design of the built environment. With a growing desire to create more liveable streets, a light needs to be shone upon the benefits of walking as a catalyst for developing sustainable, healthy, prosperous and attractive cities. From 70 years of practice, Arup recognises that a walkable city is a better city and that the more we walk, the better the city in every respect.

Cities Alive: Towards a walking world highlights the significant social, economic, environmental and political benefits of walking. Informed by specialist insight and multidisciplinary expertise from across our global offices, we highlight 50 benefits of walking explored through 16 distinct indicative themes, and list 40 actions that city leaders can consider to inform walking policy, strategy and design. These are informed by a catalogue of 80 international case studies that will inspire action, and further aid cities in identifying and evaluating opportunities.

Standing at the northwestern edge of Concord CityPlace’s Block 36 North, Mayor John Tory announced a plan to create a 21-acre park above the rail corridor that cuts through an area that has quickly become a part of Toronto’s Downtown. Stretching from Blue Jays way to Bathurst Street, the City of Toronto‘s planned Rail Deck Park would stitch together the urban fabric while providing a vital green space to the growing core
. With Downtown Toronto’s population continuing to surge, the 8.5 hectare park would provide a much-needed communal space to Downtown neighbourhoods where public infrastructure has not kept pace with development, the Mayor explained. “The Downtown core has far less parkland than other parts of the City,” said Tory, stressing the urgent need to provide social infrastructure—including transit, affordable housing, and public space—to keep up with explosive population growth. The area of the proposed 21-acre park (not yet designed), image courtesy of the City of Toronto

In reclaiming scarce urban land, the plan follows international projects like Chicago’s Millennium Park and New York’s Hudson Yards—as well as the much smaller Mouth of the Creek Park planned beside and beneath the Bathurst Street Bridge. By decking over the existing Union Station Rail Corridor, the tracks below could remain operational while the space above would be reclaimed for public use. For the CityPlace, King Spadina, and Fort York neighbourhoods that straddle either side of the rail corridor, the park would provide both a vital communal space and a link to others part of Downtown. For the geographically sequestered CityPlace in particular, an improved connection with the more established urban environments to the north could be a significant boon. The urban context, showing the relative lack of park space (click for a closer view), image courtesy of the City of Toronto

Following today’s announcement, City Staff will compile a preliminary report, which will be presented to the Executive Committee on September 22nd. The report will outline the steps needed to secure—and then redevelop—the space, beginning with the City’s acquisition of air rights from Toronto Terminals Railway, which is jointly owned by CN and CP.

From there, the specifics of the plan are expected to take somewhat clearer shape in the coming months. As it stands, Tory was not able to provide a concrete timeline or cost estimate for the project. However, the Mayor noted that a project of this scope is likely to cost “tens of millions of dollars per acre.” Additionally, he noted that the 4-5 year planning and construction timelines of similar projects throughout the world may indicate a generally expected schedule for the new park. A comparison of the 21-acre space with other Downtown parks, image courtesy of the City of Toronto

Prepared by Toronto landscape architecture firm Public Work, an outline of the project’s scale underlines the new park’s potential as a conduit of urban activity. At 21 acres, the space is equivalent in size to Stanley Park, Little Norway, HTO Park, Clarence Square, and Victoria Memorial, combined. As Ward 20 Councillor Joe Cressy put it, parks and public spaces are particularly important for condominium residents, for whom space is at a premium. “If you live in a condo, the park becomes your backyard,” Cressy told the audience.

At times, the din of GO and UPX trains threatened to drown out parts of the Mayor’s speech, underlining the impact of the rail corridor on Toronto’s urban core. Surrounded by residential towers, the land remains a relic of an industrial era. While the King Spadina and CityPlace neighbourhoods adjacent to the rail corridor had a combined population of approximately 1,000 residents in 1996, over 40,000 people now call those communities home. Over the next decade, more than 30,000 are expected to join them.

A before and after comparison of the space, image courtesy of the City of Toronto

For Downtown as a whole, the total population is expected to double—to 475,000 people—over the next 25 years. Considering the extent of population growth, and the spatially limited high-rise homes being built, public space is coming at an increased premium in Downtown Toronto. At 21 acres, a park of this magnitude would be huge—and hugely important.

We will keep you updated as more information about the proposed Rail Deck Park—and a plan to fund it—becomes available. Want to share your thoughts? Leave a message in the space below this page, or join in the ongoing conversation in our Forum.

EDITOR’S NOTE: This article was amended to reflect the fact that the air rights above the Union Station Rail Corridor continue to be owned by Toronto Terminals Railway, and not Metrolinx, as previously reported.

Where the world’s billionaires live

The Martin Prosperity Institute here in Toronto recently published an interesting report called The Geography of the Global Super-Rich.

A correlation analysis was also done to see what key variables – such as population, density, economic output, global city standing, VC investment, and so on – were positively correlated with a greater concentration of super rich people.

There are 1,826 billionaires across the world according to Forbes. The researchers were able to match 99% of them to a specific metro area / primary residence.

Here are the top 20 metro areas in terms of the number of billionaires: 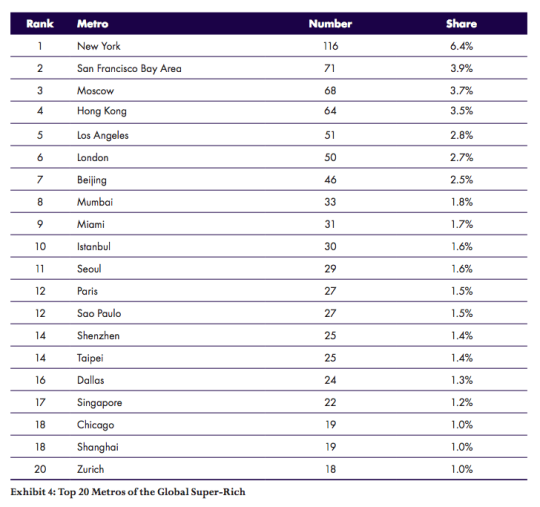 I suspect that this may surprise some of you. But Miami has grown into a significant global city. As one of my friends from Miami likes to tell me: “The best thing about Miami is that it’s a Latin American city that’s so close to the United States.”

Here are the top 20 metro areas in terms of total billionaire wealth: A bunch of changes on this list because of extremely wealthly people and families in places like Bentonville (Arkansas) and Omaha.

One of the conclusions of the report is that the size of the city generally matters:

Here is a chart comparing population to the number of billionaires: 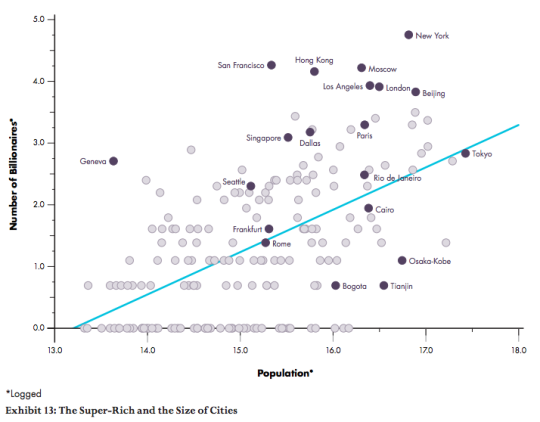 Cities such as New York, Moscow, and Hong kong, which sit far above the blue line, have more billionaires than their population size would predict.

Here is a similar chart comparing venture capital investment to the number of billionaires: Once again, there is a positive association.

Finally, here are a two charts that show which industries have produced the most billionaires: 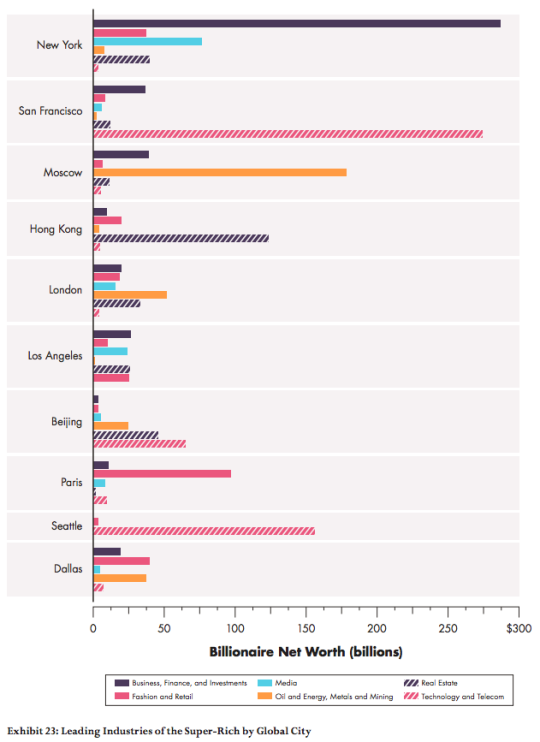 If you’re interested in this study, you can download the full report here. All of the charts were sourced from the report.